3rd Grade School Teacher Back to Work, After 3 Years of Unsuccessful Treatments

In 2005, near the end of the school year, I ruptured my Achilles tendon. After a successful surgery, the cast was removed and all that remained was a small pressure ulcer. What followed was three years of infections at the wound site; three surgeries to clean up the wound site, and a fourth surgery to try to close the wound. When the wound was unveiled after the last surgery it looked so bad my wife wept and had to be comforted.

A nurse representing the worker’s compensation insurance company was present and immediately authorized hyperbaric chamber treatments. Within two weeks of starting the treatments, the technicians at the wound care clinic noticed a significant improvement in the condition of the wound. They stated that they had never seen a wound change so quickly and were delighted. The end result of the sessions in the chamber can be seen in the photos below. I am still healing, but the wound is closed and I can swim and bathe normally once again.

Those are the basic facts, but they don’t describe the healing experience. The technicians are as professional and pleasant as can be. You are put at ease by their competence and kindness. During my sessions I caught up on the movies I had missed and looked forward to each peaceful treatment. I can’t recommend Advanced Hyperbaric Recovery of Marin enough. 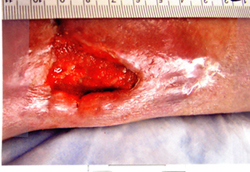 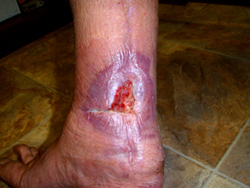