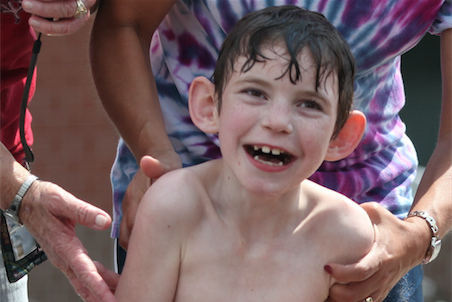 Cerebral Palsy (CP) is a neurological disorder that affects 1 in 303 children in the U.S. with 8,000 new cases every year, making it the most devastating motor disability in childhood. This tragic disorder affects movement, posture and other motor skills and may result in the need life-long care. (1)
True Medical grade Hyperbaric Oxygen Therapy (HBOT) especially early on can help change the trajectory of a CP child’s life. Please read on! …… 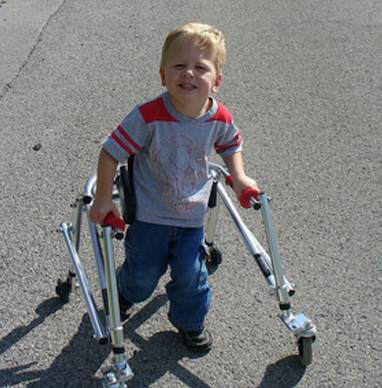 CP is caused by abnormal development of the brain or damage to the developing brain that affects a child’s ability to control his or her muscles. There are several possible causes for this abnormality to the brain to occur.

The brain damage that leads to CP can happen any time before birth up to the first years of a child’s life, while the brain is still developing. (2) This brain damage can also develop during a long prolonged or difficult birth where the baby also may have a lack of oxygen.

The injury of CP manifests as problems with tone (muscle stiffness or floppiness), uncontrollable movement (dyskinesia), and poor balance and coordination (ataxia). There are four main types of CP.

CP children also have other problems that are the result of the injury process affecting wider areas of the brain.

The above multiple problems and potential disabilities may include mental retardation, epilepsy as well as feeding difficulties.
Screening for these conditions should be part of the initial assessment. (5) 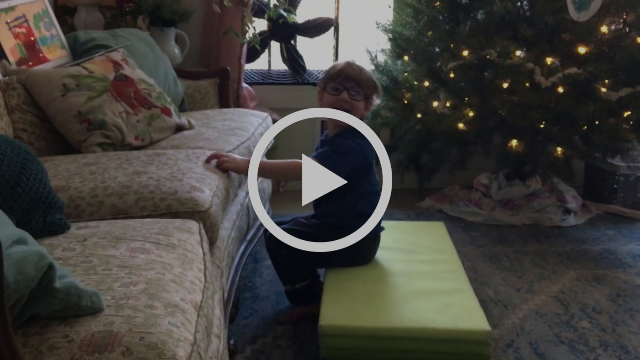 When Sammy came to us, he was without any motor control, unable to hold up his own head, unable to sit up. He cried day and night.
Sammy is now a happy little man who sleeps through the night. Over a 3 year period, Sammy received 172 HBOT treatments alongside his
multidisciplinary therapy regiment.
Now Sammy can sit up, scoot, reach out to hold his cup,
partially feed himself and verbalize many words. He loves music.
This latest video made us cry tears of JOY!
At 5 1/2 years old Sammy is seen here demonstrating great improvement.
As you can hear, Sammy receives extensive support from his loving family network.
Sammy continues to make improvements with every HBOT treatment set and is one of many more children in need of more HBOT therapy.
A first study with HBOT for children with Cerebral Palsy;
10 years in the making.

The study covers a 10 year span from 1996 and 2007 comparing the efficacy of intensive versus nonintensive rehabilitative treatment in children with cerebral palsy and the use of HBOT.
There were 150 children in four different groups. Each child received intensive rehabilitation care by the same therapist team, at the same center, using the same protocol, the same duration of follow. (1), (2)
This study is the first empirical study recognized by the Undersea Hyperbaric Medicine Society (UHMS) that demonstrates the efficacy for HBOT.

Hyperbaric Oxygen Therapy is one of several additional interventions to assist in the child or adult with chronic CP’s quality of life. (2)

Effected improvements in tests of gross and fine motor skills as well as decreased spasticity and improved visual capability are tested. (3)
HBO has been advocated for the improvement of both functional and cognitive ability. (7)

Many studies are done, and what is true is that there is much more to a child’s development and their parents experience than can be reported in a study.
A Letter to the Editor following a study done in 2001 it states; “It is important to state that everyone who was involved agreed that their improvements were statistically and clinically very significant. Statistics never reveals the whole picture. (4)
During this study (in Lancet above) we have seen many tremendous functional improvements. At an age where we did not expect any dramatic changes, some children started to walk, to speak, or to sit for the first time in their lives.” and the letter goes on. 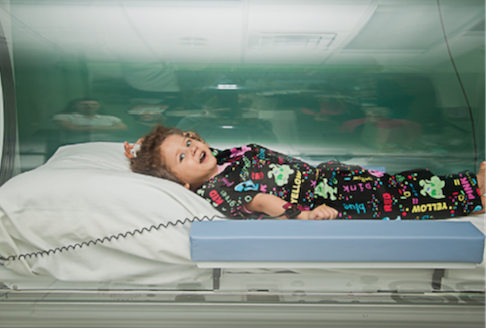 (Hyperbaric oxygen (HBO2) therapy for children with cerebral palsy (CP) is not new. This following study evaluated the effects of HBO2 therapy for 25 children, ages 5.6 +/- 1.6 yr with a functional diagnosis of spastic diplegic CP. Pre- and post-HBO2 evaluations consisted of the following measures: gross motor function measure (GMFM), fine motor function (Jebsen test for hand function), spasticity (modified Ashworth scale), video analysis, and parental questionnaire. The protocol for HBO2 therapy was 20 treatments for 60 min.
Results showed improved GMFM in three of the five items in the GMFM test, improved fine motor function in three of the six hand tests, reduced spasticity in three of four muscle groups when assessed by a physician specializing in CP, and improvements for four of nine questions posed to parents. (2)

Testimony from one mother regarding her 16 month old baby girl; (names are withheld)

We are now half-way through. It’s difficult to attribute our baby girl’s changes uniquely to HBOT as we are using HBOT in conjunction with other treatments and therapies but she has vastly improved since she has started the treatment: she is more present and alert, her vision is greatly improved (she focuses better, tracks better, smiles back at strangers), her tone and head control are stronger, she moves a lot more and started doing new things: touching her knees first and now started to play with her feet, better hand control when playing with her toys. She also improved her cough and how she manages her secretions. Our baby’s biggest issues are to be able to protect her airways and manage her secretions. When she is sick and must constantly fight to breathe, she cannot put much energy into learning how to move better and develop. HBOT gives her more energy to learn when doing therapies and also prevented her to be very sick when everybody got a cold and her sister was sick at home.

Yes! I Definitely recommend HBOT for anyone with kids of any age with what ever degree of CP. Its definitely worth investing in, as I have only seen positive outcomes so far. It has also been beneficial for me. I have had 20 dives (out of the 40 dive proven protocol) with our baby and I feel more full of energy than I have in a long time. Its been a huge support in helping myself to maintain my own health and wellbeing so I can be strong and present for my daughter. Having a child with very special needs can be exhausting and being able to help my daughter while also helping myself is amazing. Also my skin has become soft and elastic, the hairline fracture in my foot which would niggle from time to time is no longer noticeable and I really feel younger! ANONYMOUS, Netherlands 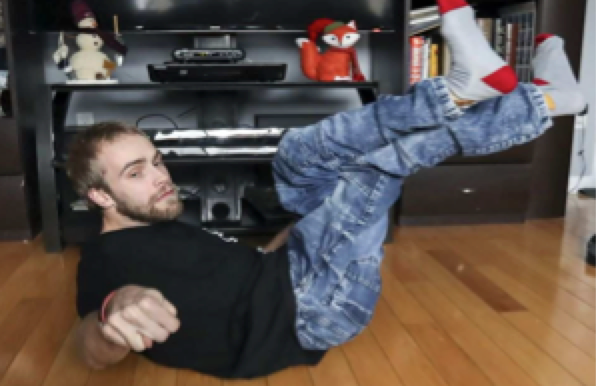 Michel Nadeau, who has cerebral palsy was once only wheel chair bound. Seen here performing breakdance moves at his Pincourt home.

Montreal residents; twin brothers, Michel and Matt Nadeau, were born with CP resulting from brain damage due to a lack of oxygen before birth. Read more about their very rare birth and their challenges. Mother, Claudine Lanoix, their advocate, wanted them to undergo hyperbaric oxygen therapy, which has shown positive results for people with cerebral palsy. Because of her very positive experience having her sons treated, she is now a Certified Hyperbaric Technician who runs the Island Hyperbaric Centre in Pincourt. 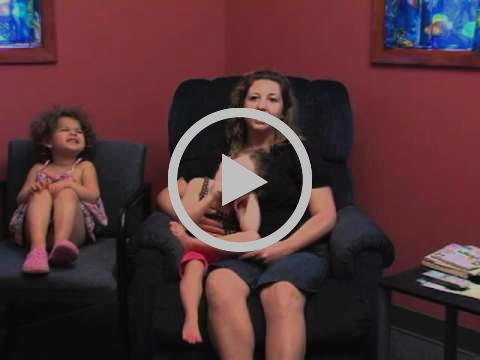 Hear a testimony of Marley’s mother. Marley, born with CP; hearing impairment, behavior and cognitive difficulties, kidney disease, all improved with HBOT.
Benefits of HBOT for CP include the following;
ENHANCE NEUROLOGICAL REPAIR AND REGENERATION WITH HBOT

Improvement is often subjective as reported by family members. 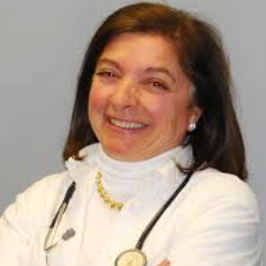 Dr. Giussippina Benincasa-Feingold MD
Dr. Giussippina Benincasa-Feingold MD, a pediatrician who worked in a pediatric emergency room; mother of 5. In 1996 she gave birth to a gorgeous baby, who would be diagnosed with CP and would suffer slow to no improvements.
Dr. Feingold was told about HBOT by her own mother. She disregarded HBOT for CP, calling it absurd. In her words “my mother would constantly badger me to try HBOT, and I finally gave in.”
At 3 1/2 years old, daughter Elisa began HBOT. After 12 treatments, the improvements were so dramatic that Dr. Feingold became convinced. During a 6 month period, daughter, Elisa received 120 treatments. That summer she had developed more than 1000 words and was actually making three-word sentences. She became completely toilet trained and, for the very first time since she was born, mom says, “I felt that I had a daughter!”
Read more of our colleague and amazing parent, Dr. Feingold.

Would you like to have a direct effect in changing the life of a Special Needs Child Or Help change the trajectory of a whole family’s struggling to support them?
You can DONATE to our Hope For Healing Institute, 501c educational and charitable non-profit. All donors receive a letter of donation acknowledgement. The donor uses this letter as proof of his or her contribution to claim a tax deduction. These precious Children are waiting for your help.
Please SHARE this information. Thank you very much!
More reasons Why Hyperbaric Oxygen Therapy (HBOT) is effective:
Read these 22 reasons that HBOT can help you.
For wound healing, HBOT will increase growth factors, endothelial progenaitor cells (EPCs), and stem cell production. (13)
HBOT is given in a hard steel medical grade device called a Hyperbaric chamber. HBOT has been defined by The Undersea and Hyperbaric Medicine Society, as breathing 100% oxygen at a pressure greater than one atmosphere absolute (ATA). (14) 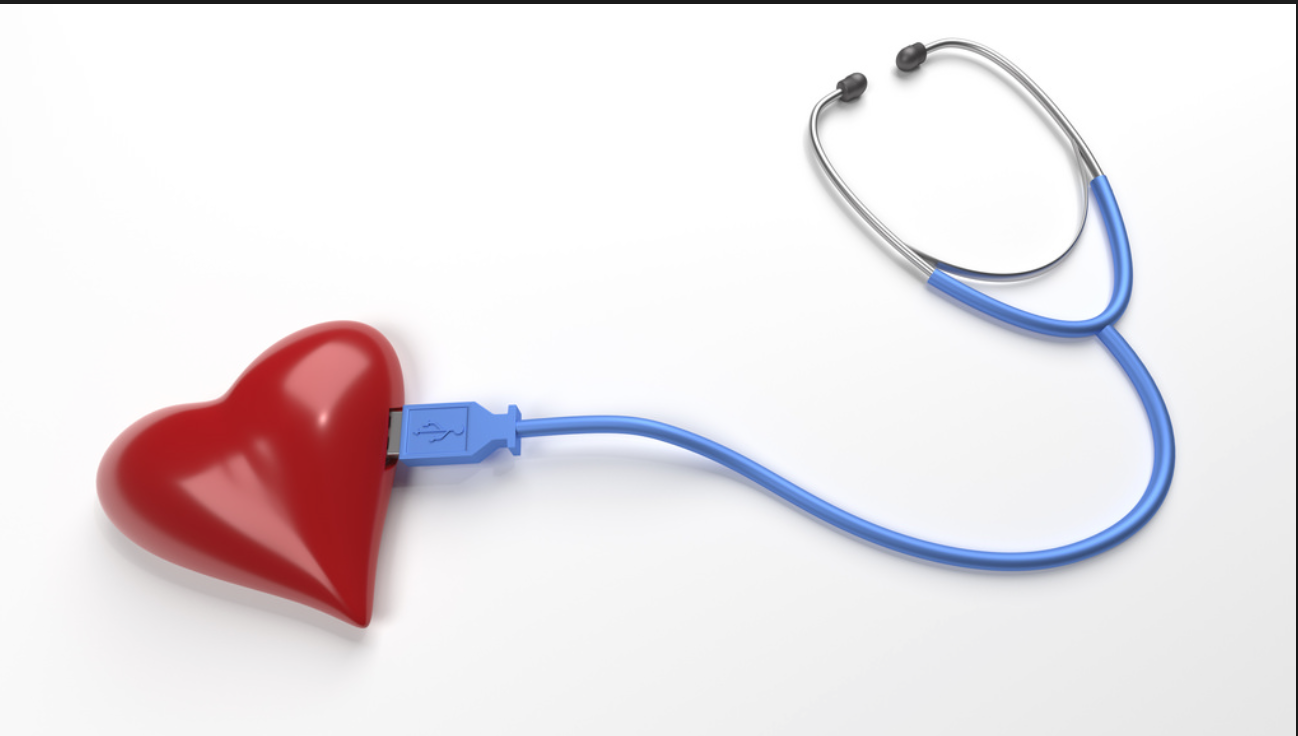 Our award winning facility is conveniently located 10 miles north of the Golden Gate Bridge near beautiful San Francisco. We would love for you to come and tour our facility.

We charge a fraction of the cost, using the same style chambers as a hospital-based Hyperbaric unit.
If YOU or anyone in your family or anyone in your community might be a candidate,
whose quality of life may be greatly improved with Hyperbaric Oxygen Therapy,
Please consider this remarkable medicine today.
Call us today for more information or to schedule a consultation with our Medical Hyperbaric Physician.
415-785-8652 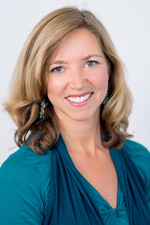 Help us alleviate suffering, save or change a life, and especially
improve quality of life for our local Bay Area Neighbors!
Please Donate now.